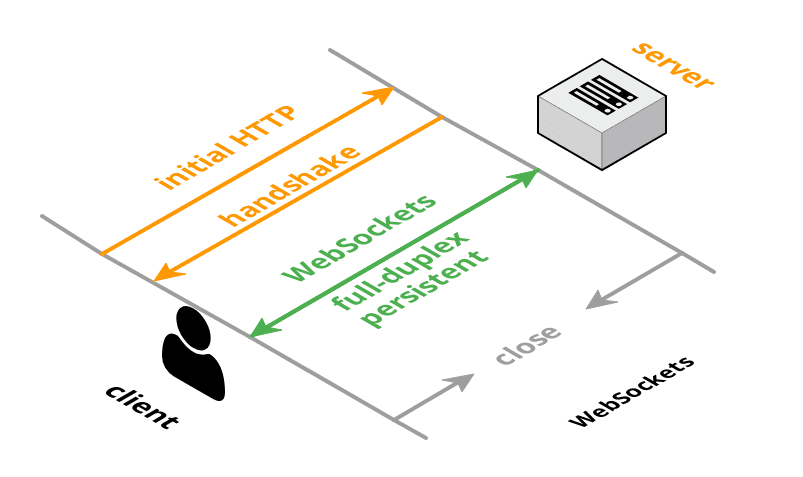 Why Websocket and Not HTTP?

In earlier times, the client-server model was built with client requests the server for a resource. The Web was built for this kind of model, and HTTP was sufficient to handle these requests. However, with new advancements of technologies, needs of online gaming and real-time applications have marked the need for a protocol that could provide a bidirectional connection between client and server to allow live streaming.

Web applications have grown up a lot and are now consuming more data than ever before. The biggest thing holding them back was the traditional HTTP model of client-initiated transactions. To overcome this, many different strategies were devised to allow servers to push data to the client. One of the most popular of these strategies as long-polling. This involves keeping an HTTP connection open until the server has some data to push down to the client.

The problem with all of these solutions is that they carry the overhead of HTTP. Every time you make an HTTP request, a bunch of headers and cookie data are transferred to the server. Initially, HTTP was thought to be modified to create a bidirectional channel between client and server. Still, this model could not sustain because of the HTTP overhead and would undoubtedly introduce latency. But in real-time applications, especially gaming applications, latency cannot be afforded. Because of this shortcoming of HTTP, a new protocol is known as WebSocket, which runs over the same TCP/IP model, was designed.

WebSockets provide a persistent connection between client and server that both parties can use to start data at any time. The connection is initiated from the client through a WebSocket handshake. This happens over a normal HTTP request packet with an “Upgrade” header. A sample connection is shown below:

Later, if the server supports the WebSocket connections, then the server responds with an “Upgrade” header in the response. A sample is below:

After an exchange of these request and response messages, a persistent WebSocket connection is established between a client and a server.

WebSockets can transfer as much data as you like without incurring the overhead associated with traditional HTTP requests. Information is transferred through a WebSocket as messages, each of which consists of one or more frames containing the data you are sending (the payload). To ensure the message can be appropriately reconstructed when it reaches the client, each frame is prefixed with 4-12 bytes of data about the payload. Using this frame-based messaging system helps to reduce the amount of non-payload data that is transferred, leading to significant reductions in latency.

Note: the “Upgrade” header tells the server that the client wants to initiate a WebSocket connection.

WebSocket has some inherent security issues. Some of them are listed below:

Below are the recommendations / best practices around the security flaws listed above: