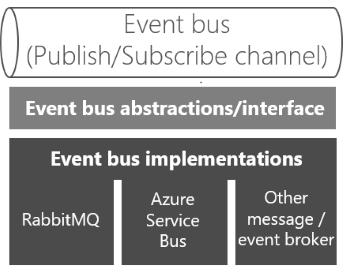 How do you achieve anonymity between publisher and subscriber? An easy way is to let a middleman take care of all the communication. An event bus is one such middleman.

An event bus is typically composed of two parts:

An abstraction of an event bus with multiple implementations based on infrastructure messaging technologies like RabbitMQ, Azure Service Bus, or another event/message broker.

The interface should be generic and straightforward, as in the following interface.

The Publish method is straightforward. The event bus will broadcast the integration event passed to it to any microservice, or even an external application, subscribed to that event. This method is used by the microservice that is publishing the event.

You can see a working example of this here: