The iPhone is the top smartphone, but some Android rivals like the Galaxy S III are very attractive, and they’re available in large sizes that the iPhone is not. Plus, they support cool technologies Apple doesn’t support.

If you’re ensconced in the Apple fold, you may believe you have to stay all-Apple. It turns out that you can bring Android largely into the Apple ecosystem.

Apple’s iCloud sync and cloud storage service is one of iOS’s and OS X’s key attractions. But Apple keeps it in the family to encourage people to commit. However, you can access iCloud email from the standard Android Email app.

The key is to sign in using your iCloud account’s me.com address, not your icloud.com address. The incoming server is mail.me.com, and the outgoing server is smtp.me.com. SSL should be on.

iCloud’s auto-syncing contacts and calendars make it supereasy to keep your Mac, iPhone, and iPad up to date with each other. They even work with Windows — but not Android.

Sign in with your iCloud credentials, and your Android smartphone is now part of the iCloud family.

Apple’s iCloud Documents feature in iOS — recently brought to OS X — can be very handy for keeping documents in sync across all devices you use to access or edit them. It’s an Apple-only feature for which there is no way to gain foreign access.

But that’s OK. iCloud Documents is quite limited, requiring the same app on each device to read a particular file type. Many apps in iOS aren’t on OS X, such as OS X’s TextEdit text editor, so iCloud Documents often can’t do the job.

You should use Google Drive or DropBox instead; many iOS apps support them natively, and they work on pretty much every mobile and desktop OS today.

Apple’s Safari 6 in iOS, OS X, and Windows has a neat feature called iCloud Tabs that syncs the URLs of all open tabs to all other devices using Safari 6 tied to the same iCloud account. Bookmarks are also synced across these three OSes.

Again, there’s no way to open up Safari’s iCloud tabs and bookmark syncing to Android — so don’t use Safari. Google’s Chrome browser has a similar sync capability, and it’s available for Android, iOS, OS X, and Windows. (Firefox can also sync across platforms, but recently dropped its iOS sync app; it’s not an option if you’re using an iPad or other iOS device.)

Find a lost or stolen smartphone

Another great iCloud feature is Find My iPhone, which tracks your iOS and OS X devices, so you can find them on a map, send an alert (in case your phone is hidden under a blanket, for example) or message, and lock or wipe them if necessary. Just be sure you set the device so that a thief can’t turn off this feature. Again, Android can’t join in.

But there’s a comparable service called Lookout that lets you find, lock, or wipe a missing Android device from any browser. The basic version is free. However, be warned that it’s easy for a thief to disable it if he or she notices it’s installed.

One of Apple’s stickiest technologies is iTunes, which is both a library for your entertainment and store from which to get more of it. Google’s free Music Manager app for Windows and OS X syncs nonprotected music wirelessly to your Google Play account, but it must be streamed to your Android device.

A better choice is the free DoubleTwist Player app, which syncs music, videos, and photos. Also, it can transfer these items from iOS device to Android. You need both the Android client and OS X or Windows client. Note that DoubleTwist is full of come-ons for in-app upgrades — annoyingly so. The $5 AirSync add-on is worthwhile, as it allows Wi-Fi syncing between your computer and Android device.

Apple TV is an insidiously useful device, acting as a wireless bridge between Macs and iOS devices for screen mirroring and streaming of movies, music, podcasts, and photos. It too is an Apple-only technology.

But the £5 AirSync add-on utility for DoubleTwist lets you stream music and videos from an Android device to the Apple TV, just as if it were an iPhone or iPad. When it works, that is — I often could not get the AirTwist streaming icon to appear, and I never did figure out why.

iTunes includes the iBookstore, which lets you buy e-books for reading on the iBooks app on an iPad or iPhone, but iBooks doesn’t work on other devices, not even Macs. Except for the special Multi-Touch e-book format for the iPad, it’s not a great bookstore to use.

Amazon.com’s Kindle app is a better choice, as it works on every major mobile and desktop platform, and its book selection is much larger than Apple’s.

Everyone knows by now that iOS 6’s Apple Maps has major flaws, and Apple has apologized for them. Plus, it provides voice navigation only on an iPhone 4S or iPhone 5. Compare that to Android, whose navigation app has worked well for several years on all Android devices.

But an even better option is the free Waze app; it’s available for both iOS and Android. It provides voice navigation on older iPhones, too.

It’s a cliché, but a true one: In iOS, there’s (very likely) an app for that. Android has a smaller app selection. But you’ll find that content apps and services apps (such as for banking, public transit, and airlines) are almost always available for Android if available for iOS. Ditto for basic utilities such as flashlights, social media, restaurant finders, and bar-code scanners.

Have I gone to the dark side and switched over yet, no, I’m still running my iPhone 4s and Google Nexus 4 together.  So I’m still sitting on the fence, perhaps the Samsung 4 will tip me over, we’ll just have to wait and see.

I’ve had an iPhone for a year and a half now, and I’m still finding things it can do, here are a few things that I have found:

Have you found any more features that I have missed?

Well it just had to happen, on Friday my iPhone slipped out of my hand and hit the floor flat on the screen.

So just ordered a Nokia 8310 as a replacement, for the time being.

I’ve created a simple iPhone Theme for the BlogEngine, using both Style Sheet, with a few tweeks, from the iUI Project Members, and a simple javaScript accordian by dezinerfolio.com 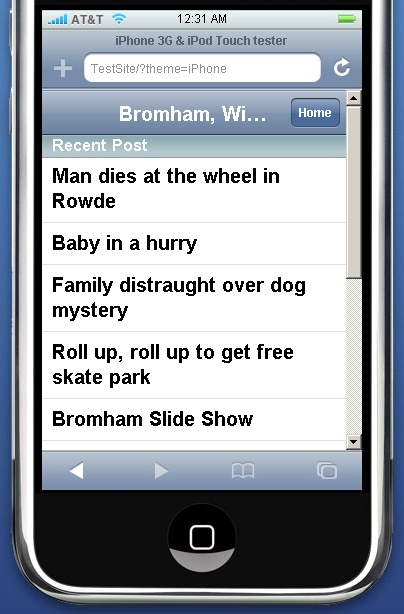 Just places iPhone folder in the Themes directory of the BlogEngine.

This is the first pass at an iPhone theme, there are still features I’d like to put in, such as Previous and Next links, Pages, Categories, but not had time to do that at the moment.

Further information on CSS for the iPhone can be found here